Introduction to Quasicrystals (the basics) 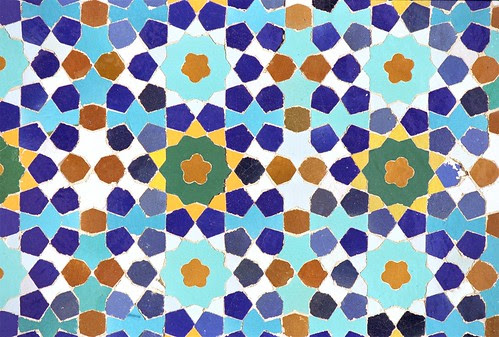 Bizarre Crystal Hitched Ride on Meteorite
A rock fragment containing a previously unidentified natural quasicrystal may be the remnant of a  meteorite that originated in the early solar system more than 4.5 billion years ago before Earth even existed.
Until now, researchers had assumed such quasicrystals, whose atoms are arranged in a quasi-regular pattern rather than the regular arrangement of atoms inside a crystal, were not feasible in nature. In fact, until now the only known quasicrystals were synthetic, formed in a laboratory under carefully controlled conditions. (This year's Nobel Prize in chemistry honored Dan Shechtman for his 1982 discovery of quasicrystals, which at the time were thought to break the laws of nature.)

"Many thought it had to be that way, because they thought quasicrystals are too delicate, too prone to crystallization, to form naturally," researcher Paul Steinhardt of Princeton University said. The new finding, described this week in the journal Proceedings of the National Academy of Sciences, suggests "quasicrystals are much more common in the universe than we thought," Steinhardt added.

The rock was discovered in the Koryak Mountains of Russia. Various features of the quasicrystal suggest a meteorite origin, including the shapes of the grains and its chemical composition of metallic copper and aluminum that resemble those found in so-called carbonaceous chondrites; these are primitive meteorites that scientists think were remnants shed from the original building blocks of planets. Most meteorites found on Earth fit into this group.

Recently, Peter Lu and Paul Steinhardt discovered that Islamic tile designs also include "quasicrystals". A perfectly repetitive tiling can't have 5-fold symmetry. Nor can a 3-dimensional crystal: that's why the dodecahedra formed by pyrite aren't regular. But by using patterns that never quite repeat, the Islamic artists achieved approximate 5-fold symmetry


A video with Peter Lu discussing 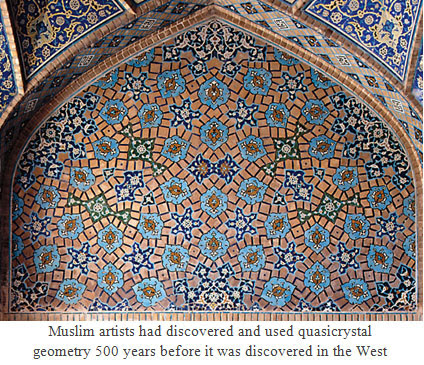 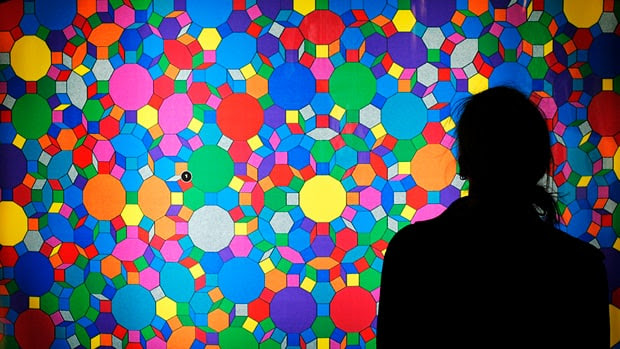 A woman stands in front of an illuminated picture of a quasicrystal on display...(Hannibal Hanschke/Reuters)

ScienceDaily (Oct. 5, 2011) — The Royal Swedish Academy of Sciences has decided to award the Nobel Prize in Chemistry for 2011 to Daniel Shechtman of the Technion -- Israel Institute of Technology in Haifa, Israel, for the discovery of quasicrystals: non-repeating regular patterns of atoms that were once thought to be impossible. 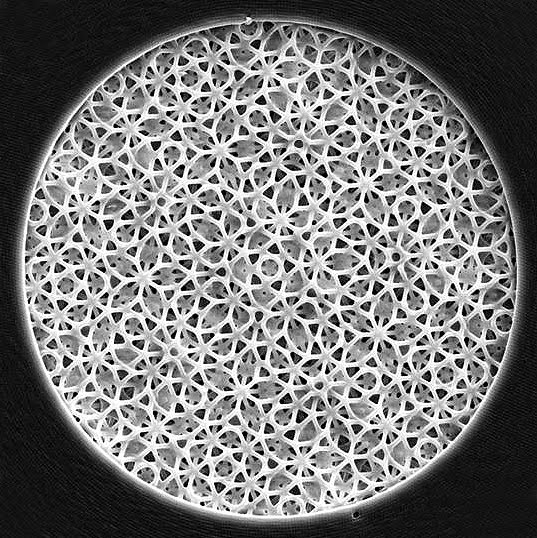 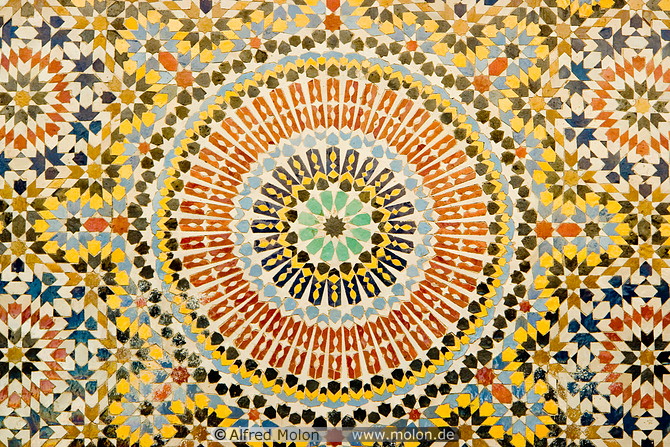 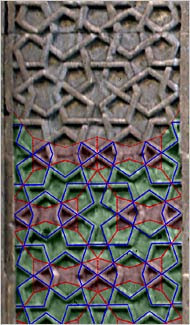 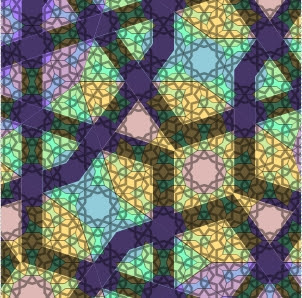 This image depicts the interaction of nine plane waves—expanding sets of ripples, like the waves you would see if you simultaneously dropped nine stones into a still pond. The pattern is called a quasicrystal because it has an ordered structure, but the structure never repeats exactly. The waves produced by dropping four or more stones into a pond always form a quasicrystal. Because of the wavelike properties of matter at subatomic scales, this pattern could also be seen in the waveform that describes the location of an electron. Harvard physicist Eric Heller created this computer rendering and added color to make the pattern’s structure easier to see.

An inifinitely symmetric photonic quasicrystal based upon the pattern seen in the seed head of the Sunflower. Diffracting a laser off this structure produces a circular diffraction pattern with no apparent underlying lower-order symmetry.

A theoretical physicist searched for years to find the only known natural occurrence of an exotic type of structure, the discovery of which netted the 2011 Nobel Prize in Chemistry
The story includes secret diaries, smuggling and the discovery that nature’s quasicrystal seems to come from a meteorite some 4.5 billion years old: far from an artificial innovation, the quasicrystal may be one of the oldest minerals in existence, formed at the birth of the Solar System. The finding was published this week in the Proceedings of the National Academy of Sciences.


quasicrystal, is a structure that is ordered but not periodic. A quasicrystalline pattern can continuously fill all available space, but it lacks translational symmetry. While crystals, according to the classical crystallographic restriction theorem, can possess only two, three, four, and six-fold rotational symmetries, the Bragg diffraction pattern of quasicrystals shows sharp peaks with other symmetry orders, for instance five-fold.
Aperiodic tilings were discovered by mathematicians in the early 1960s, and, some twenty years later, they were found to apply to the study of quasicrystals. The discovery of these aperiodic forms in nature has produced a paradigm shift in the fields of crystallography. Quasicrystals had been investigated and observed earlier,[2] but, until the 1980s, they were disregarded in favor of the prevailing views about the atomic structure of matter. In 2009, after a dedicated search, a mineralogical finding, icosahedrite, offered evidence for the existence of natural quasicrystals[3]. 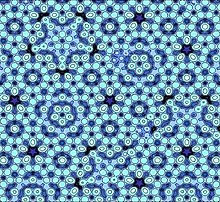 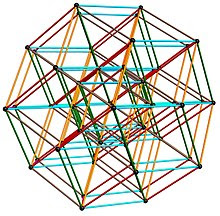 A Penrose tiling is a non-periodic tiling generated by an aperiodic set of prototiles. Penrose tilings are named after mathematician and physicist Roger Penrose who investigated these sets in the 1970s. The aperiodicity of the Penrose prototiles implies that a shifted copy of a Penrose tiling will never match the original. A Penrose tiling may be constructed so as to exhibit both reflection symmetry and fivefold rotational symmetry, as in the diagram at the right.
A Penrose tiling has many remarkable properties, most notably: 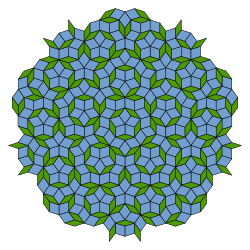 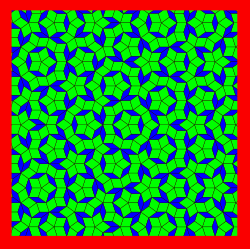 And from the brilliant blog:
WE ALONE ON EARTH

SPECULATION ON COMPLEXITY, NEUROSCIENCE, SCIENCE FICTION, AND THE FUTURE

Posted by nickyskye at 4:42 PM