When I went to my first tourist shop in India I noticed something I'd never seen before in the West, except in the enormous, elaborate, old palaces in Italy. It was inlaid stone designs, done with semi-precious stones of various kinds. Sometimes this stone inlay work was on small brown stone boxes but usually it was inlaid into super white marble. 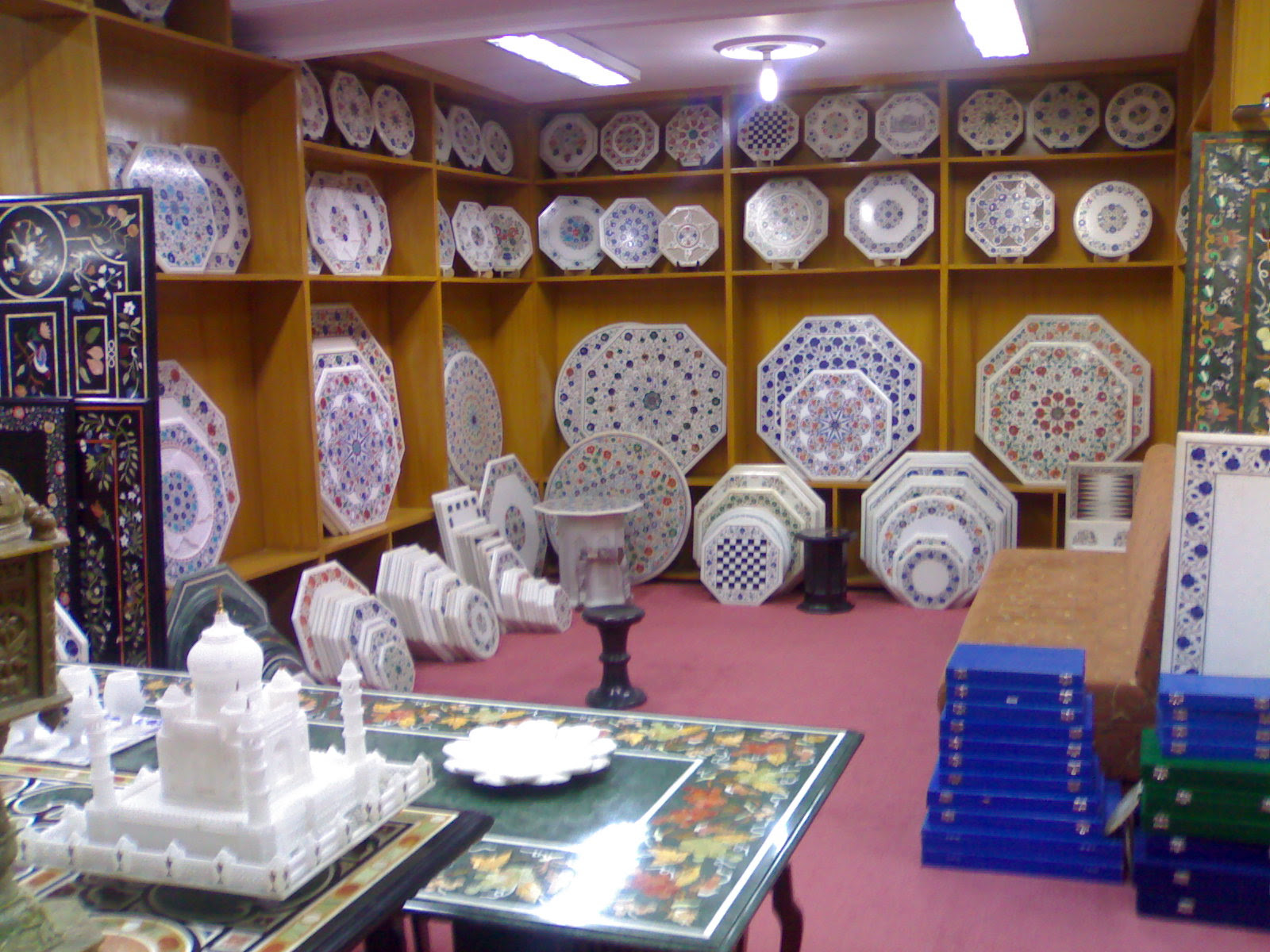 It's only now, years later, that I looked up more information about this work, learned about it on the web. The name of the work is pietra dura (hard stone in Latin) or parchin kari in Hindi, the national language of India (which is rarely spoken out of a handful of North Western Indian states).

Here below are typical tourist shop boxes of white marble with semi-precious stone inlay. The inlay here is, as far as I can see, tiger's eye, carnelian, agate, turquoise, sodalite or lapis, jasper and I'm not sure about the green stone, maybe malachite. 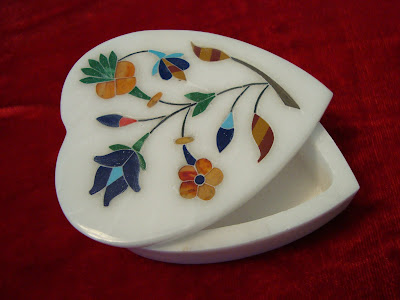 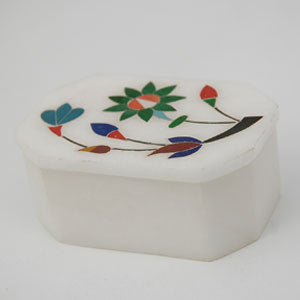 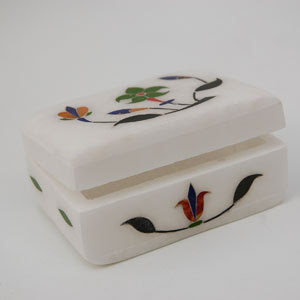 Here's an octagonal box with more intricate work, mostly in sodalite or lapis. So graceful and delicate the thin, curving lines, the flower tendrils. This one must have been done by a master artisan. On the sides of the box the marble is pierced into a kind of stone lace, this is called jali. It's a traditional Moghul idea, making this lace of rock, using it both for decoration and practical purposes. The box below is made by an artisan named Imran. 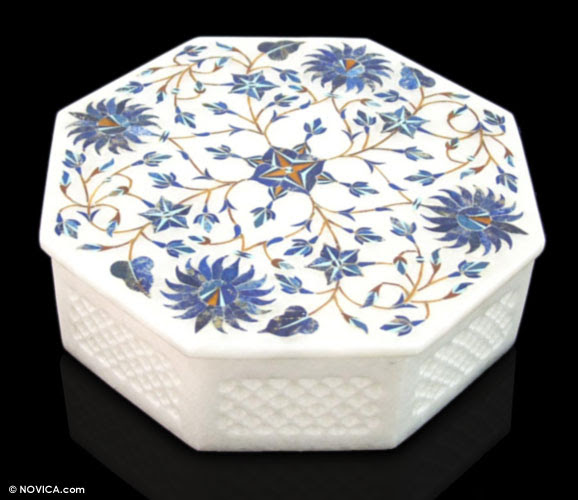 A little backstory. The Mughuls invaded India from about 1000AD to the mid 1700'sAD (about 600 years, during what was in Europe the Dark Ages to the Renaissance). When the Mughals came from what is now called Iran (then Persia), they brought with them brilliant artisans, introducing styles of art and crafts into India that had not been used or well developed before that.

When his third wife Mumtaz, died, Emperor Shah Jahan built her an enormous mausoleum, known as the Taj Mahal, now often referred to simple as "the Taj".

Here is how this work is done in India.
Marble Sculpting in Agra
Agra Marble: the art of Pietra Dura

These are typical table tops one can buy from Northern India, made with marble and parchin kari stone inlay from the Agra artisans.

This one is particularly beautiful. Makrana is a town in the Nagaur district of Indian state of Rajasthan. Makrana is famous for the white stone as marble mined from the mines around it. It is said that theTaj Mahal was built from Makrana marble. Makrana is a small town, but it has plenty of marble outcrops. Most of the residents in this town work as marble miners.


This site has good images of the Moghul Architecture in and Around Agra, India

The Taj Mahal was built by the Emperor Shah Jahan (r.1628-58) for his favourite wife Arjumand Banu Begum upon her death in 1631. Constructed of India’s finest marble, quarried at Makrana near Jodhpur, it took 12 years to build involving 20,000 craftsmen from all over Asia. The tomb and accompanying buildings are organised around a garden divided into four parts by raised walkways with water channels at their centres. The pietra-dura was done with thousands of imported precious and semi-precious stones arranged in floral designs that embellish the exterior and interior of the building. The domed white marble mausoleum stands on a plinth with tapering minarets on each corner. Its harmonious proportions and exquisite craftsmanship have made the Taj Mahal one of the wonders of the world. This drawing shows the Taj from the river, showing the mosque, mausoleum and assembly hall, with a boat in the foreground.

A little virtual tour of the Taj Mahal

Jali is the term for a perforated lattice window screen. Widely used in ancient Indian architecture, jalis are most commonly carved out of stone, using intricate geometrical patterns. Windows with jalis served two purposes, one being aesthetically beautiful and the other more practical in nature; providing natural air conditioning. When summer winds from the desert air threatened to overheat a building, the jali which invites natural air flow, cooled the building’s interiors.

The complex designs in this jali are a combination of geometric forms and shapes derived from nature, showing strong Islamic influences.  They are said to create the impression of unending repetition believed to be associated with the infinite nature of God. 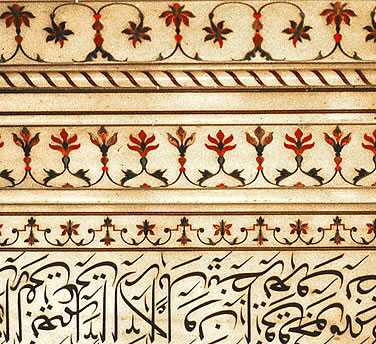 Unfortunately, a lot of the work the artisans do in Agra is in a shape that is not interesting to Western customers. Maybe rich people from Saudi Arabia have homes for the huge marble table tops or Mughal style garden furniture but these forms are not practically things most Americans or Europeans want. I think the people who guide the artisans in choices of what to make for sale need to guide the artisans about what work is to be done with more thought to what Western customers might actually buy. I say this because the art of this beautiful stone inlay is slowly being lost and the artisans end up literally selling peanuts on the street or doing some other thing to survive. 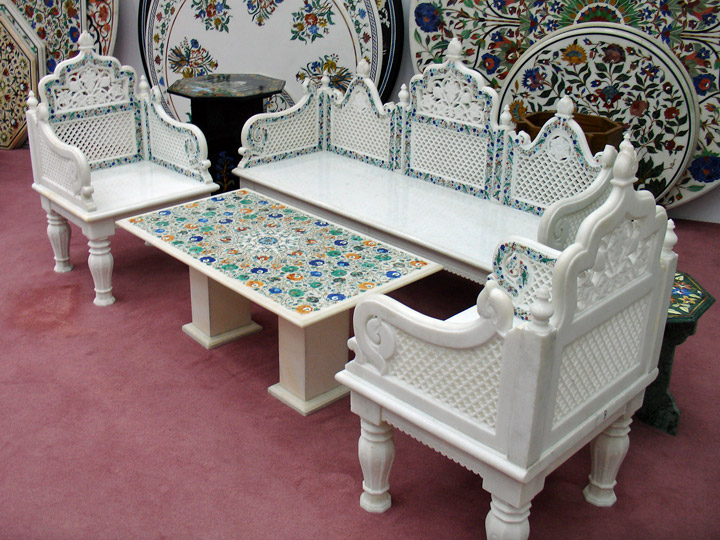 I think the artisans would do more successful business in the West if they made things that were more popular at this time for the house. Like desk accessories or mantelpieces.
or this shape but in stone. Western designers need to help the artisans of Agra to create the basic marble designs that will be desired in the West, on which the stone inlay work can be done or this art will be lost. 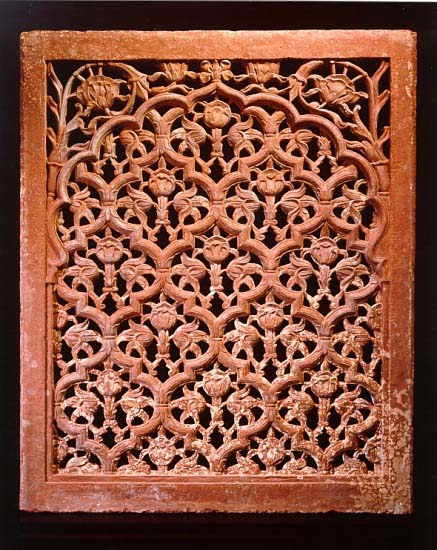 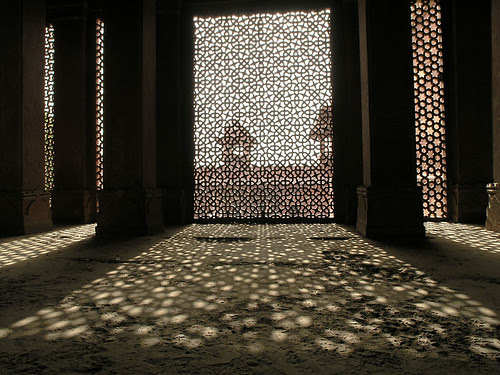 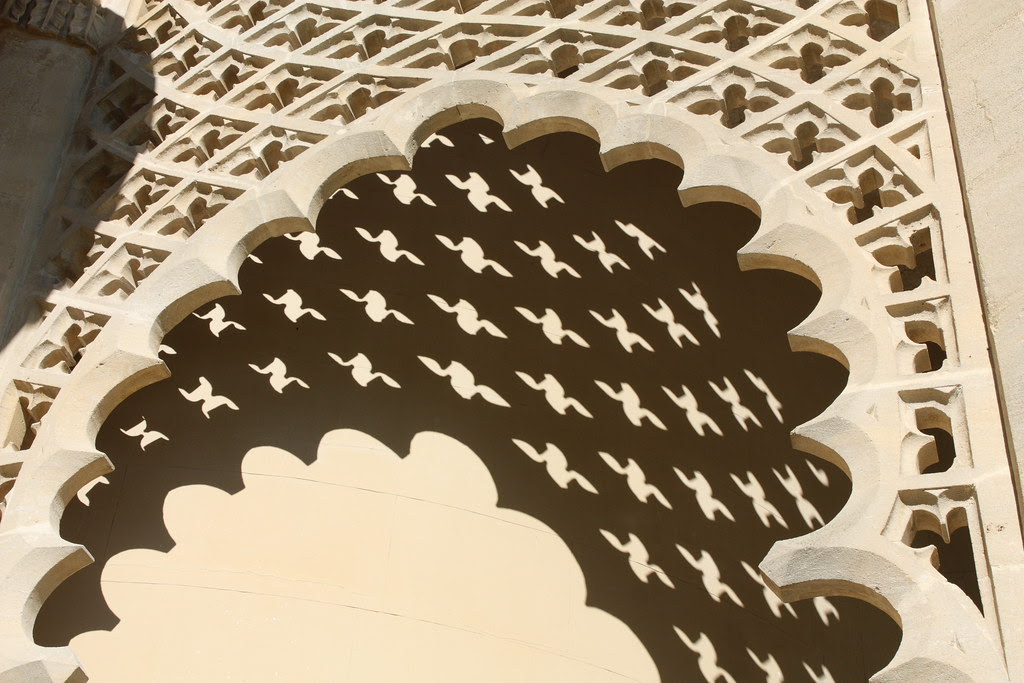