Devi on the lotus
Illustration from the Tantric Devi Series
Basohli or Nurpur, Punjab Hills, ca. 1660-70

In the foothills of the Himalayan Mountains of North West India there developed in the 17th and 18th centuries a distinctive and beautiful type of painting that came to be known as "Pahari", which means of the hills.

There were a number of styles that evolved in the different areas of these foothills, usually named after specific towns or provinces, such as Kangra, Jammu, Nurpur, Chamba, Basohli and Punjab.

There were many themes depicted in the Pahari paintings, ordinary life, gods and goddesses, festivals, portraits and court life.

One of the most popular themes was that of Krishna, portrayed in various perspectives: a god-child, a prankster, a model lover, a divine hero and the Supreme Being.

Krishna is often depicted in vignettes from the Gita Govinda or the Rasa Lila.

"The rasa lila takes place one night when the gopis of Vrindavan, upon hearing the sound of Krishna's flute, sneak away from their households and families to the forest to dance with Krishna throughout the night, which Krishna supernaturally stretches to the length of one Night of Brahma, a Hindu unit of time lasting approximately 4.32 billion years. In the Krishna Bhakti traditions, the rasa-lila is considered to be one of the highest and most esoteric of Krishna's pastimes. In these traditions, romantic love between human beings in the material world is seen as merely a diminished, illusionary reflection of the soul’s original, ecstatic spiritual love for Krishna, God, in the spiritual world."

Early Master at the Court of Mandi (Attributed). The gopis pleading with Krishna to return their clothes: folio from a Bhagavata Purana series. Mandi, Himachal Pradesh, ca. 1635–50. The Kronos Collections 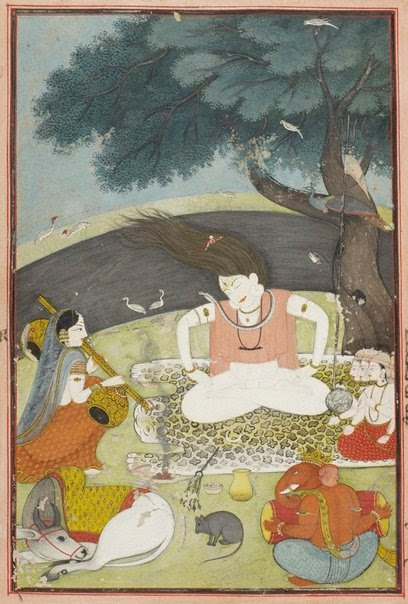 The Holy Family India
Pahari, Kangra or Garhwahl 1780-1800.
This is a family portrait of the Hindu god Shiva on Mount Kailasha. Shiva sits on a leopard skin with dishevelled hair, a sign of his ascetic practices. He is surrounded by his wife Parvati, his elephant-headed son, Ganesha, and multi-headed son, Karttikeya, who play the musical instruments vina and drums. Shiva’s bull mount, Nandi, Ganesha's rat mount and Karttikeya's peacock mount relax around the group. 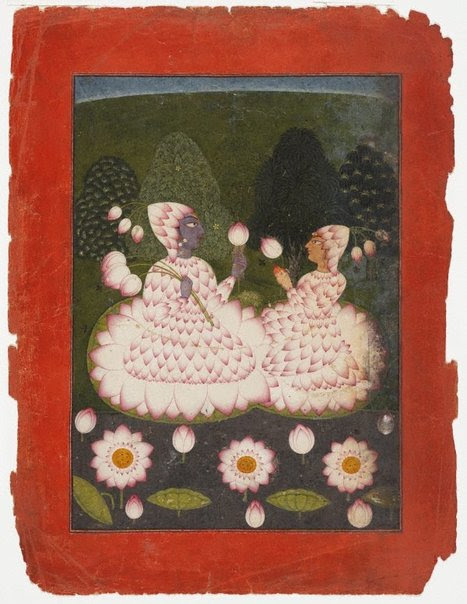 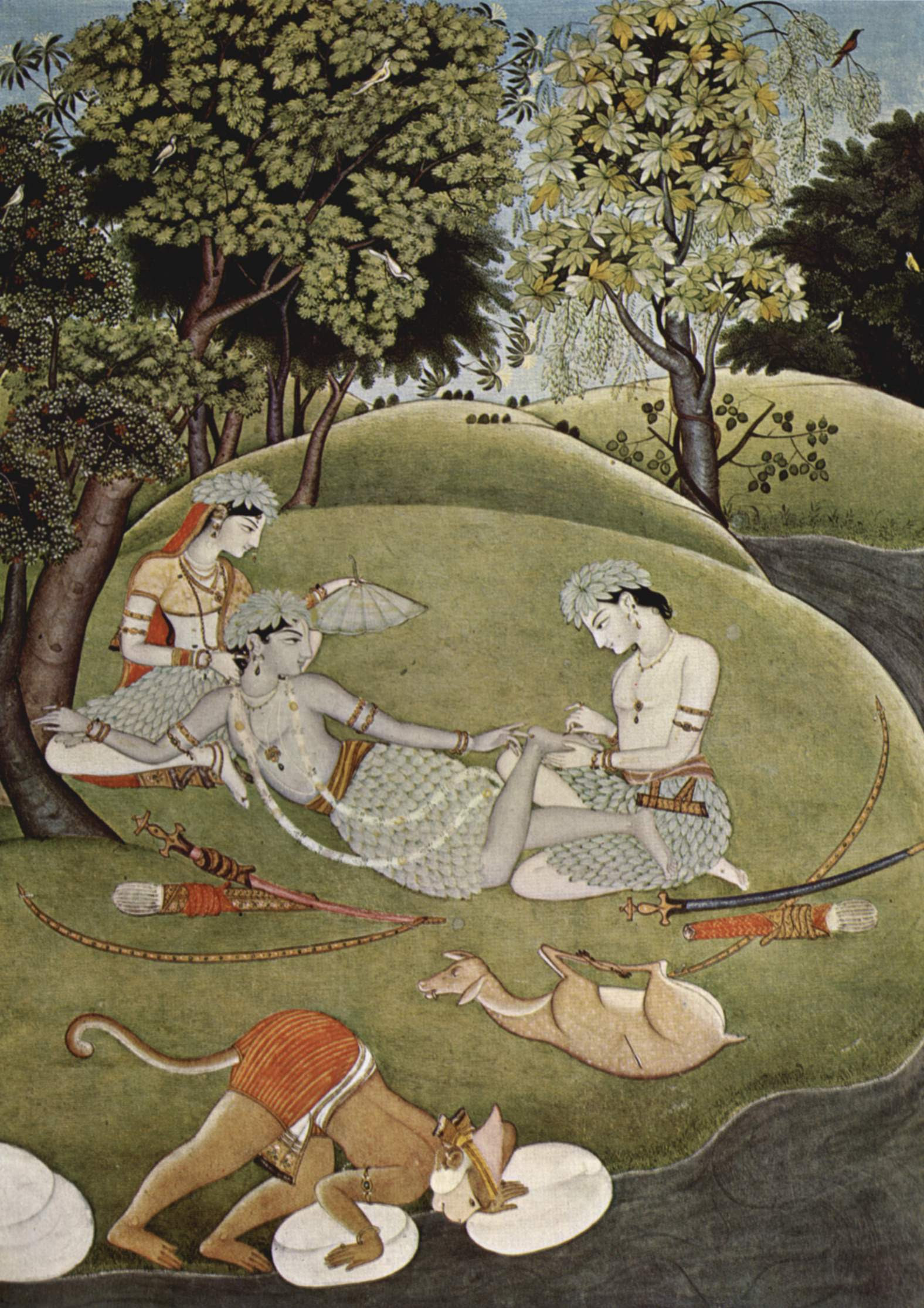 Krishna and Radha, arranging the tresses of his love. Kangra Krishna and Radha, hang on my ears the jewelled earrings O accomplished youth. 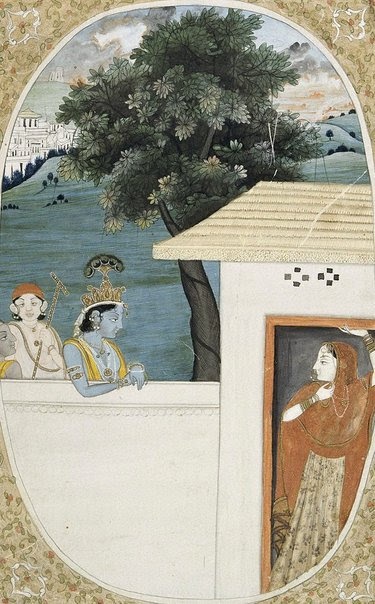 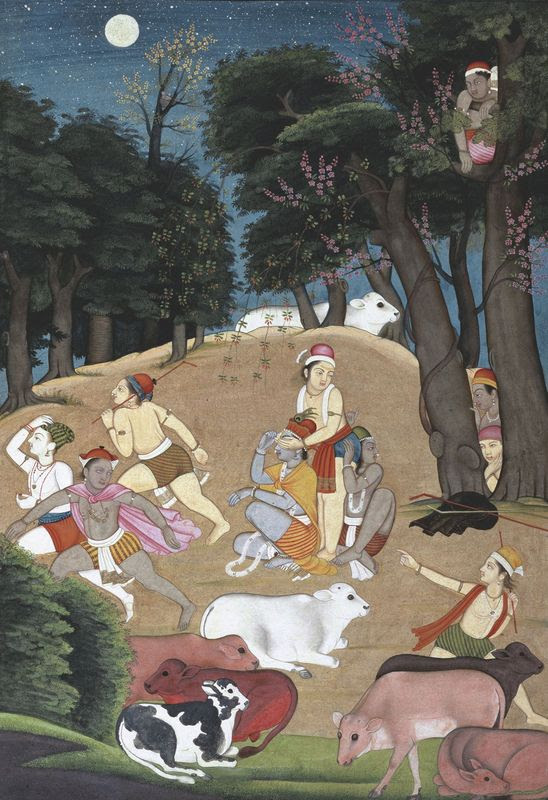 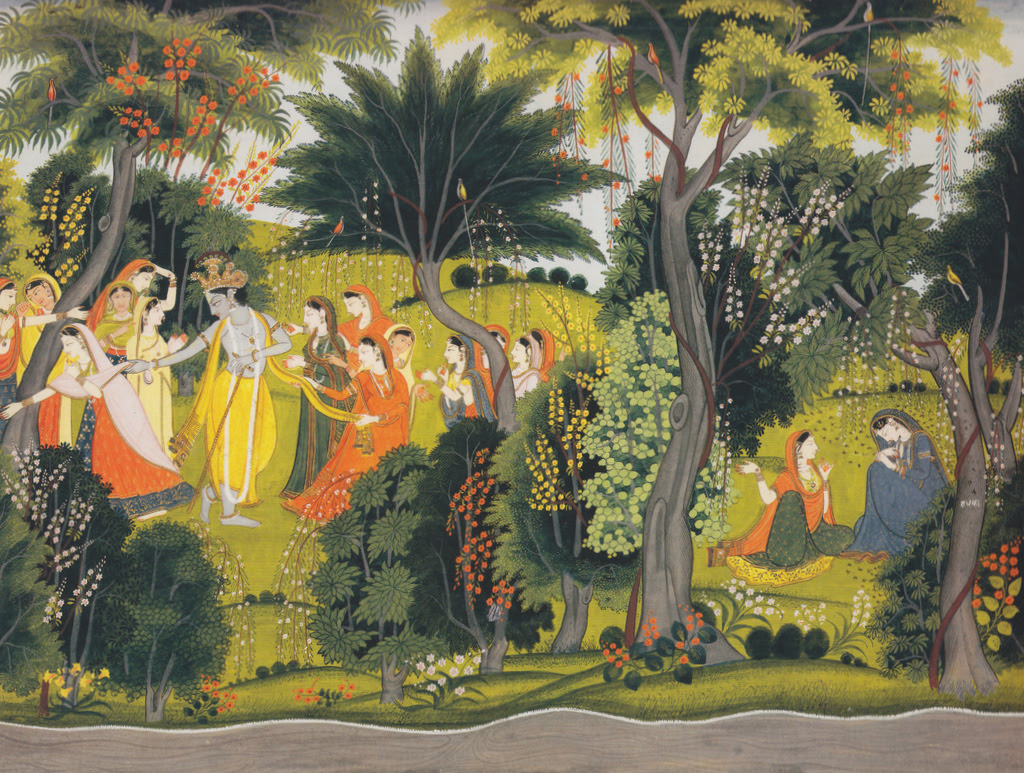 Krishna Flirting with the Gopis, to Radha's sorrow, ca. 1760 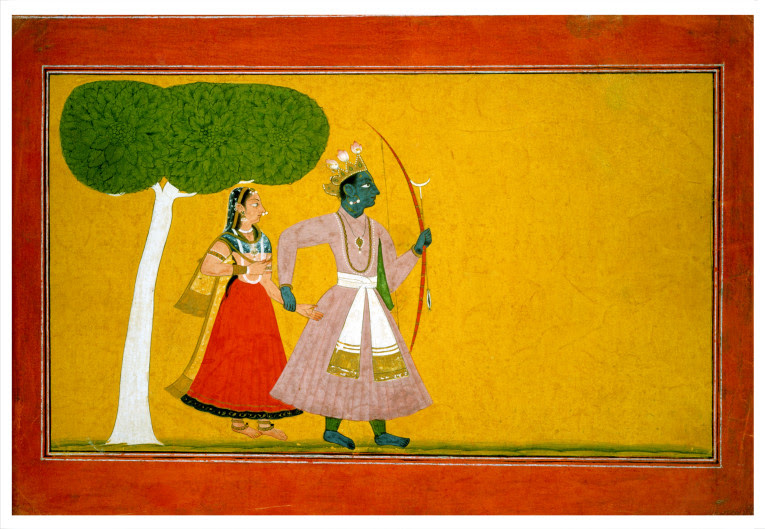 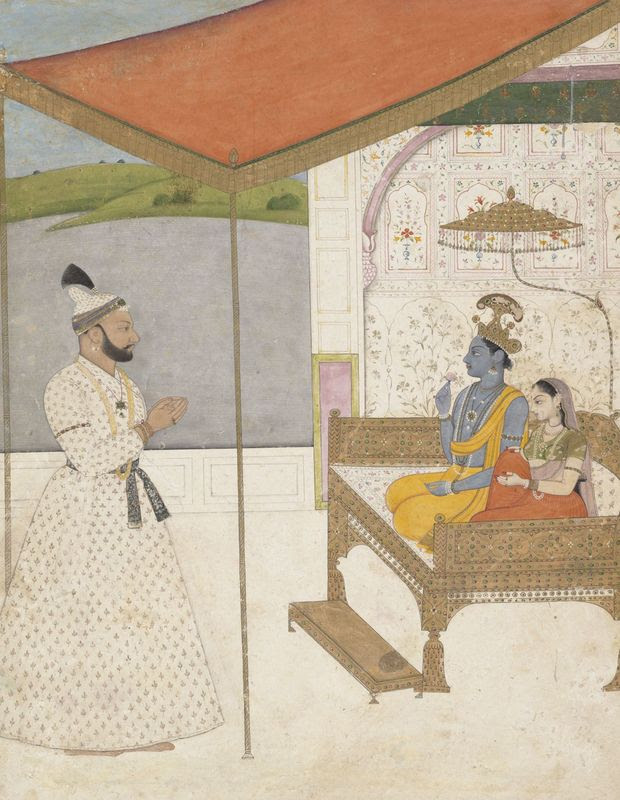 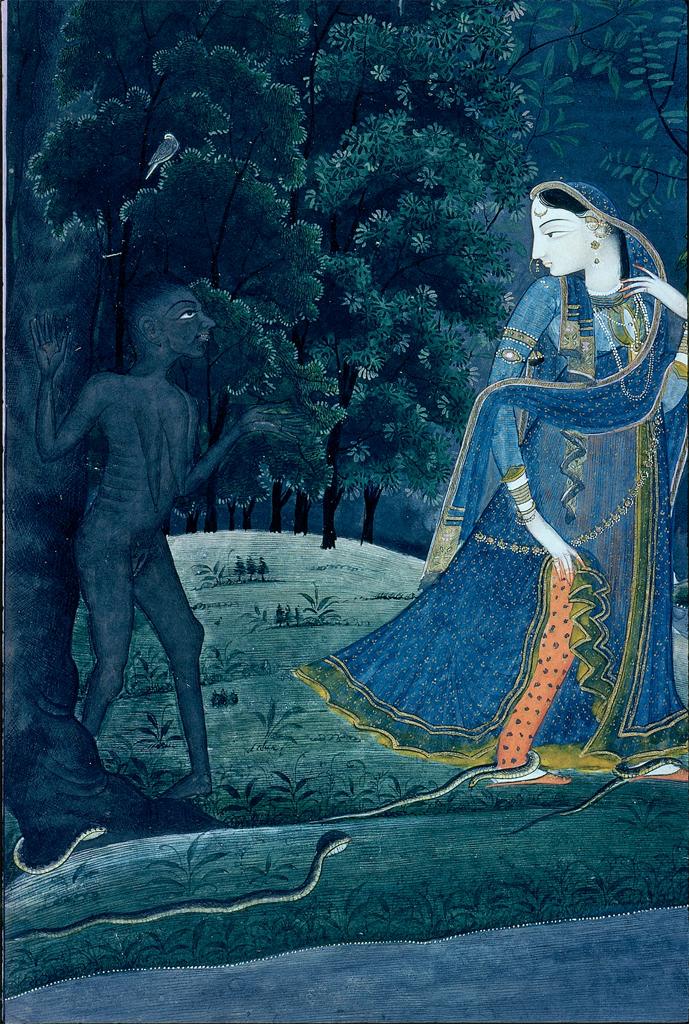 Krishna-Abhisarika Nayika meets a witch and snakes on the way to meeting her lover, Detail from an early 19th century Indian miniature painting (Period - Rajput, Pahari, Kangra school), ink and color on paper. 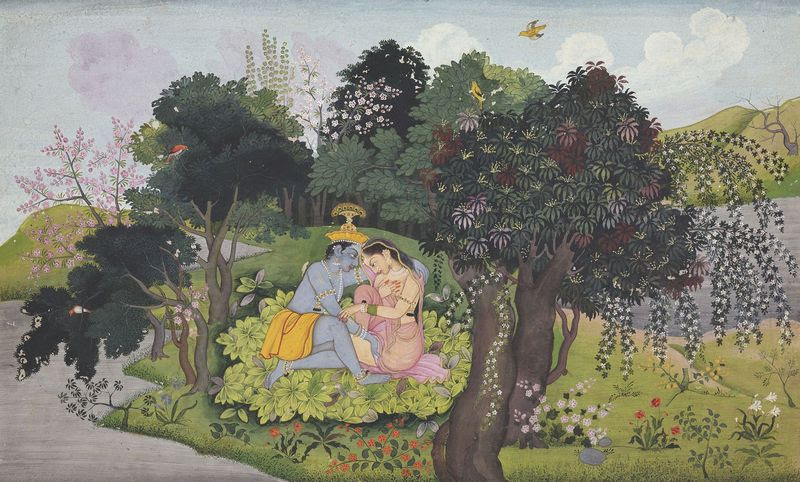 First generation after Manaku and Nainsukh. Krishna with Radha in a forest glade: folio from the second Guler Gita Govinda series. Guler, Himachal Pradesh, ca. 1775. Collection of Barbara and Eberhard Fischer, on permanent loan to the Museum Rietberg Zürich 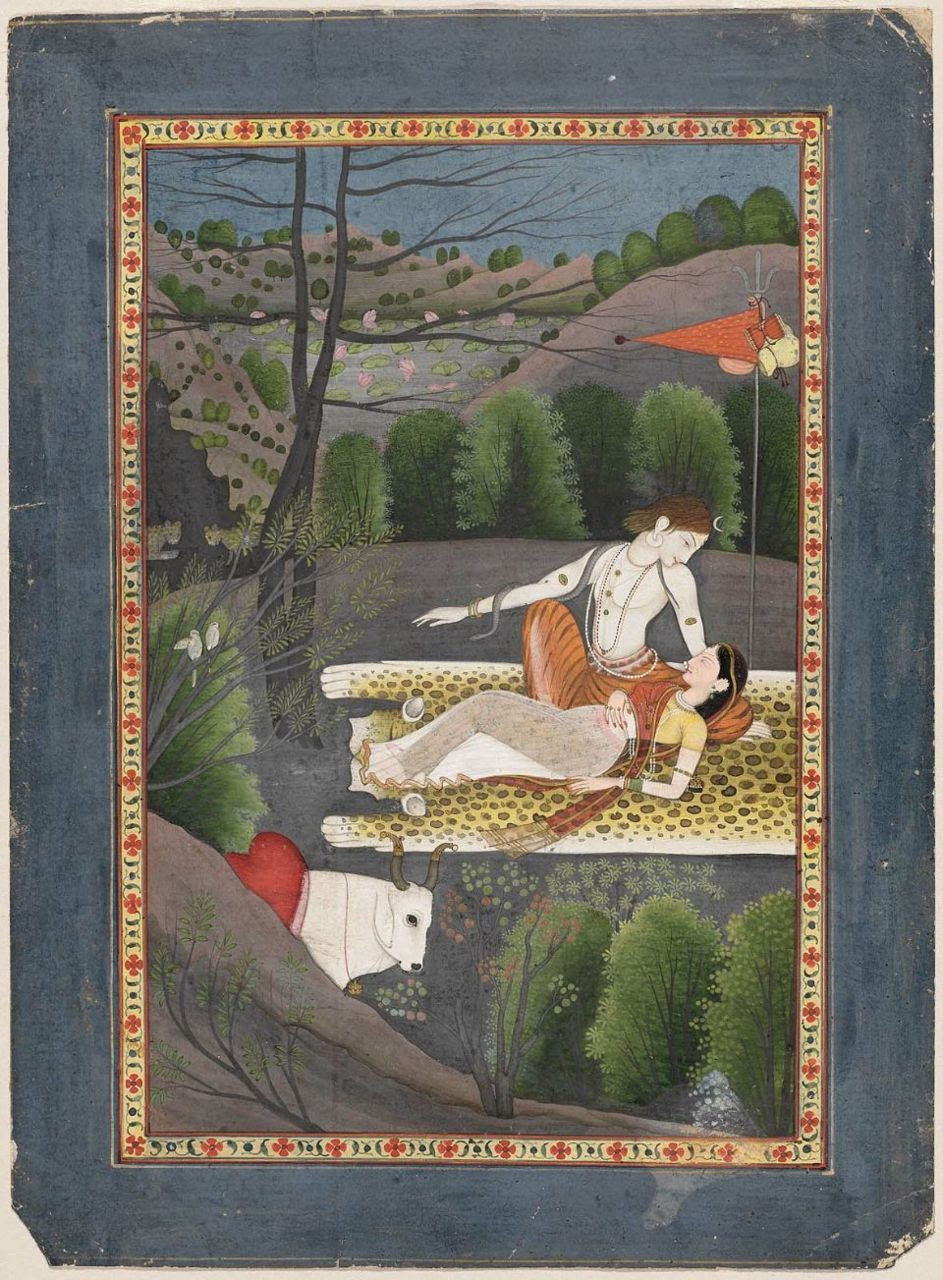 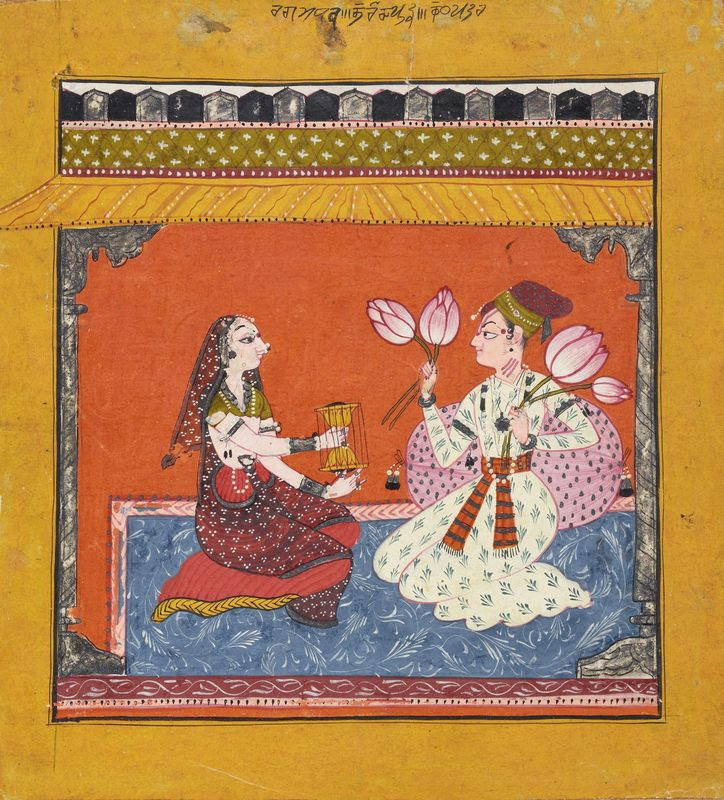 Via Art Fund: 'Radha and Krishna in the Grove' illustrated here dated circa 1780, opaque watercolour on paper, 13 x 17.5cm. This work is no.16 in one of the albums executed around 1870 by an artist from Kangra in in the Pahari Hills of Punjab, India, during the reign of Raja Sansar Chand (1775-1823). It is among the finest Indian miniatures and features Radha and Krishna, the eighth and most popular incarnation of the Hindu god, Vishnu, embracing in an idyllic landscape. The graceful, intertwining poses of the couple in this elegant watercolour meet with an ecstatic response from the natural world, where egrets graze, lotuses flower and the trees suddenly spring into bloom around them.

Via: An Illustration from the Gita Govinda: Krishna and Radha in a Bower, India, Kangra or Guler, circa 1780. Opaque watercolor heightened with gold on paper. 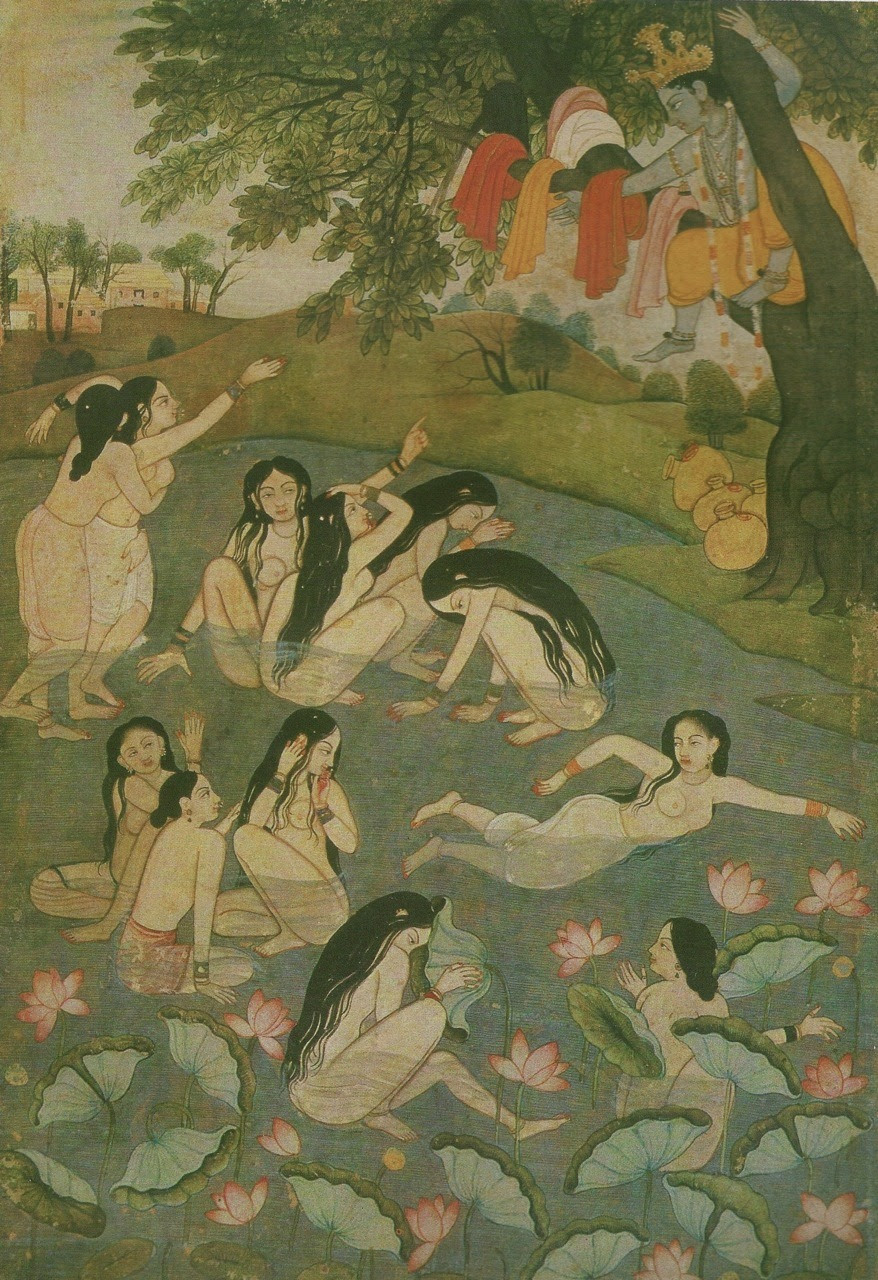 Krishna steals the clothes of the gopies Kangra, Pahari, circa A.D. 1800 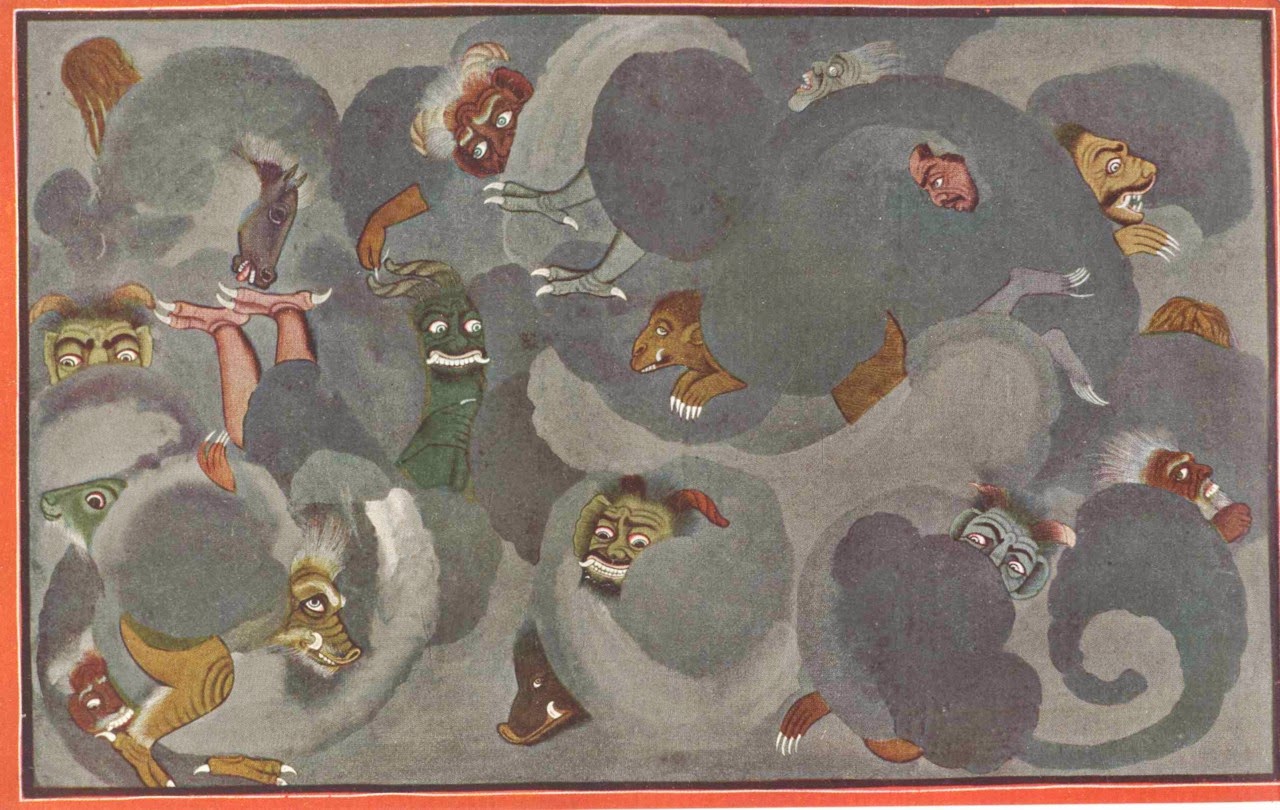 The Birth of Evil An illustration to the Bhagavata Purana, Basohli, circa 1730-40 A.D. 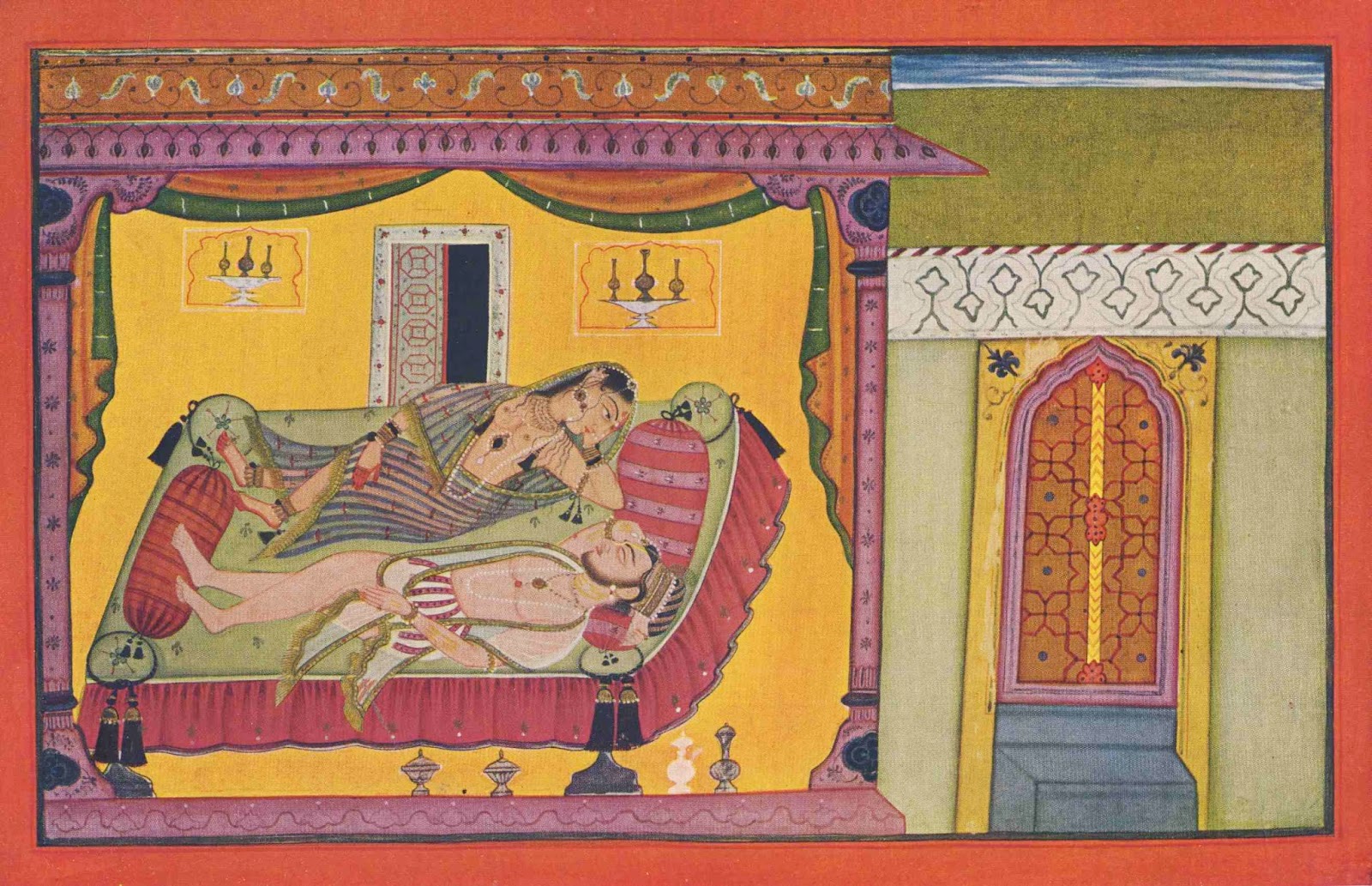 The Dilemma of the Heroine Illustration to the Rasamanjari. Basohli, circa 1695 A.D 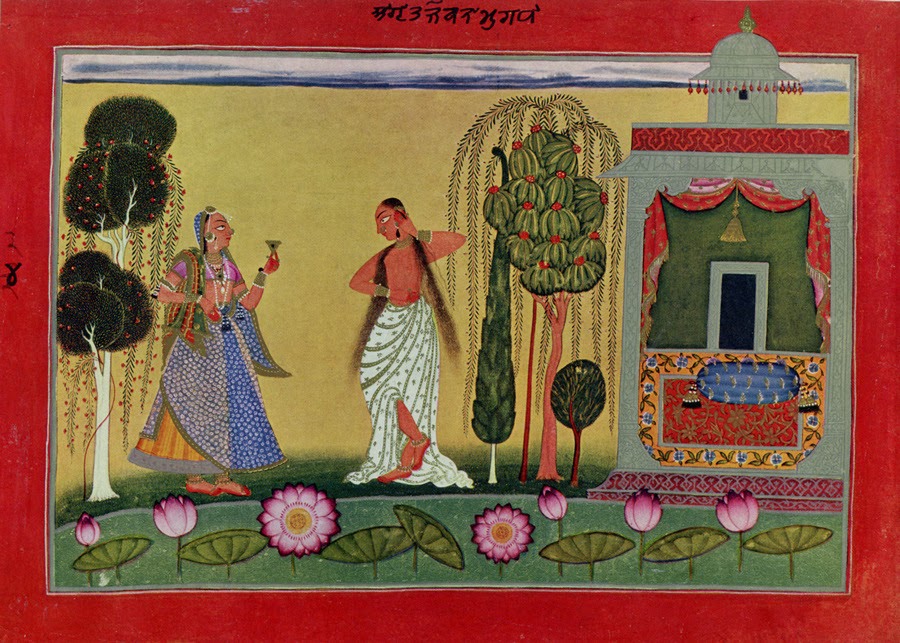 On the threshold of Youth, An illustration to the Rasamanjari. Basohli, circa 1695 A.D. 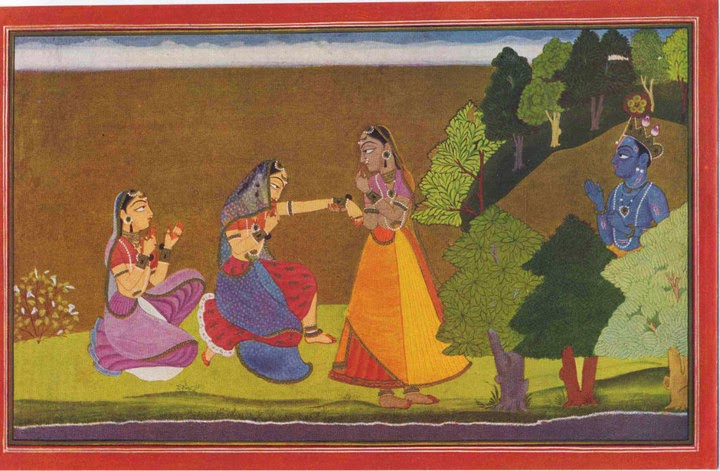 Enter the bower of Love, O Beautiful, An illustration to the Gita Govinda. Basohli, 1730 A.D.

From the excellent Navin Kumar website, Court Paintings of India from the 16th to the 19th Centuries 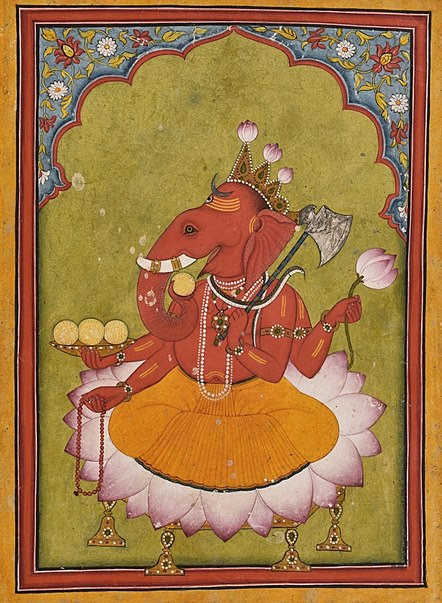 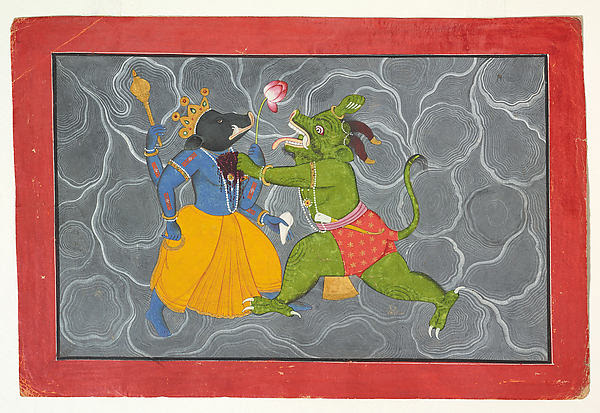 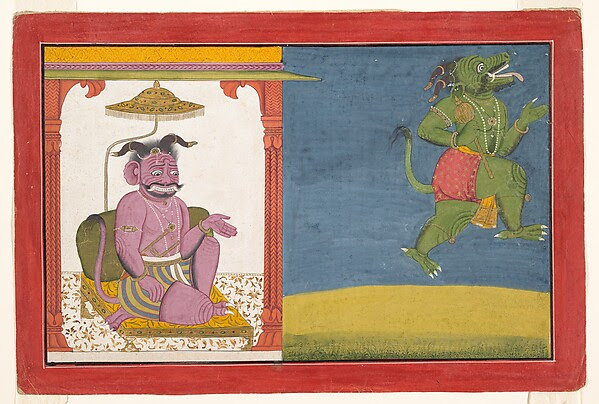 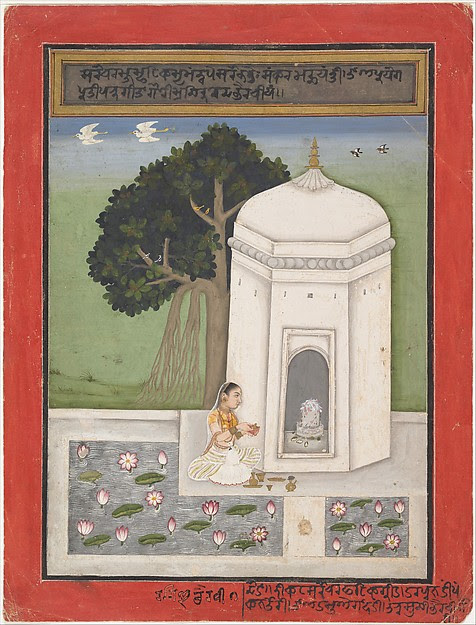 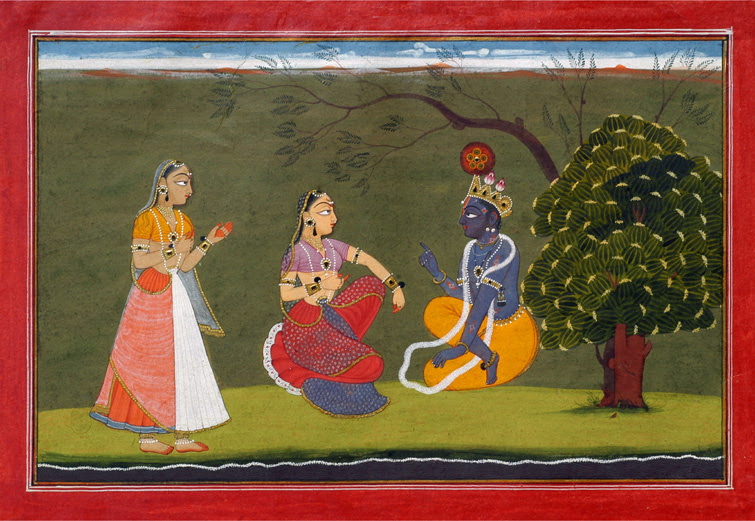 Radha and Krishna in Discussion, (An illustration from Gita Govinda) Gouache on paper
(ca.1730).

How the Himalayan foothills look these days 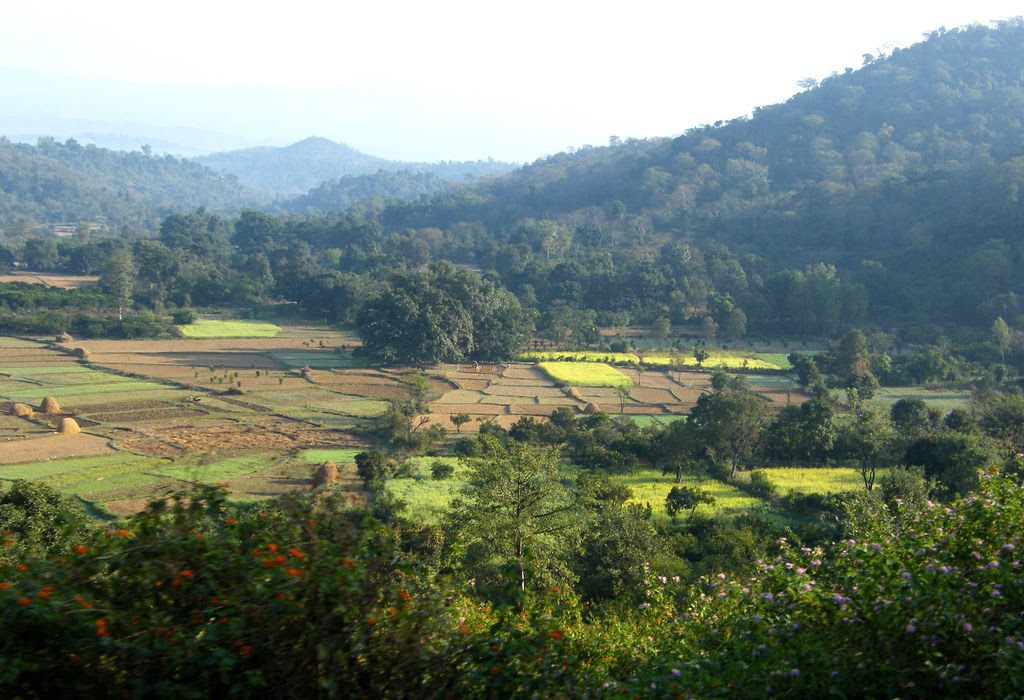 east med wanderer
Here, you can see the Himalayan region of Northern India 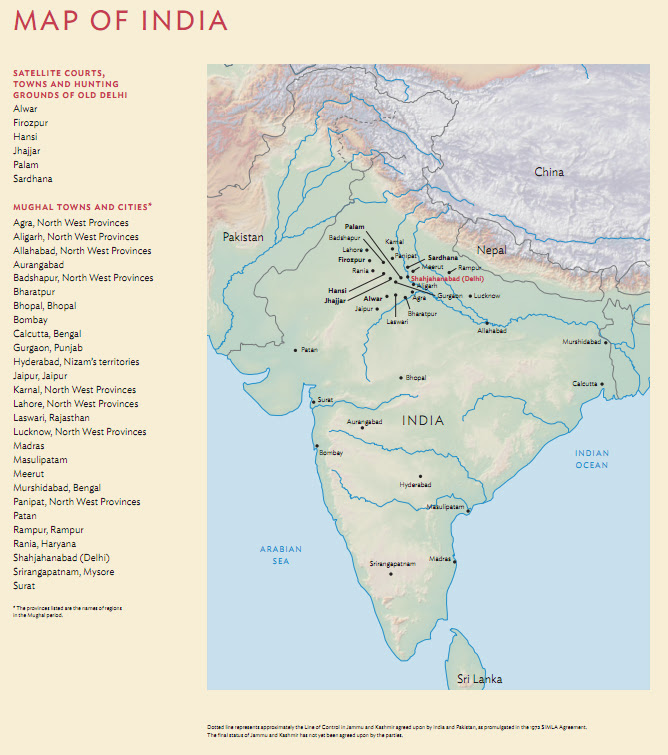 Posted by nickyskye at 4:58 AM